* Andrea Crossett is a member of SFDC’s MCAPT Committee and is a Senior Designer at Land Design.

As new development ventures kick-off, clients and design teams have traditionally worked within communities to create a sense of excitement and anticipation with graphic renderings, public workshops, and media relations. But what if there was a way to further engage the public by creating a physical draw — a usable and magnetic space — where community members could experience first-hand what a place could become before breaking ground. While long-term development plans slowly unfold, there is an untapped potential to bring immediate value to the public, and there are neighborhoods rife with opportunities for temporary activation.

Pop-ups can accelerate real estate development by activating emerging neighborhoods and supporting local businesses while creating designated pedestrian zones. While the term is sometimes used to describe interim parks preceding final development or construction of permanent public amenities, today’s pop-ups are diverse, creative, and often a key in validating the need for more public open space. The pop-up component can refer to the physical space as well as an activity that was not previously imagined, such as on-street parking becoming a temporary space for outdoor dining and retail. During the COVID-19 pandemic, we saw the mass reclaiming of open spaces and streetscapes to allow businesses to remain open and provide safe areas for people to gather.

Through thoughtful placemaking and programming, areas that are underutilized or forgotten, such as asphalt parking lots and vacant industrial parks, can quickly transform into vibrant public areas that give the community a taste of the unique urban experiences to come. Pop-up parks and retail, mobile furnishings, interactive public art installations, and local food trucks are all simple, yet effective and affordable strategies to program a space that is instantly ready for public use. Additionally, these temporary spaces can be used as tools for developers and designers to test new ideas in the public realm, inform neighborhoods about future plans, and workshop with the public, stakeholders, and community leaders.

In Tysons, VA, a temporary pop-up park, The Greensboro Green, was constructed on the future site of The Boro and reinforced the need for public open space in a high-density environment. The parklet created a designated pedestrian zone that quickly gained attention from employees from nearby offices and locals. Brightly colored sport paint masked the asphalt parking lot and interactive art and flexible furnishings allowed the space to adapt to a variety of uses. The pop-up park hosted community events, food trucks, live music, and local vendors, proving that interim destinations can be created with only 10,000 square feet. The success of the pop-up paved the way for additional interim spaces for public use in the region, one of which was recently approved and will open on the future site of Westpark Plaza. 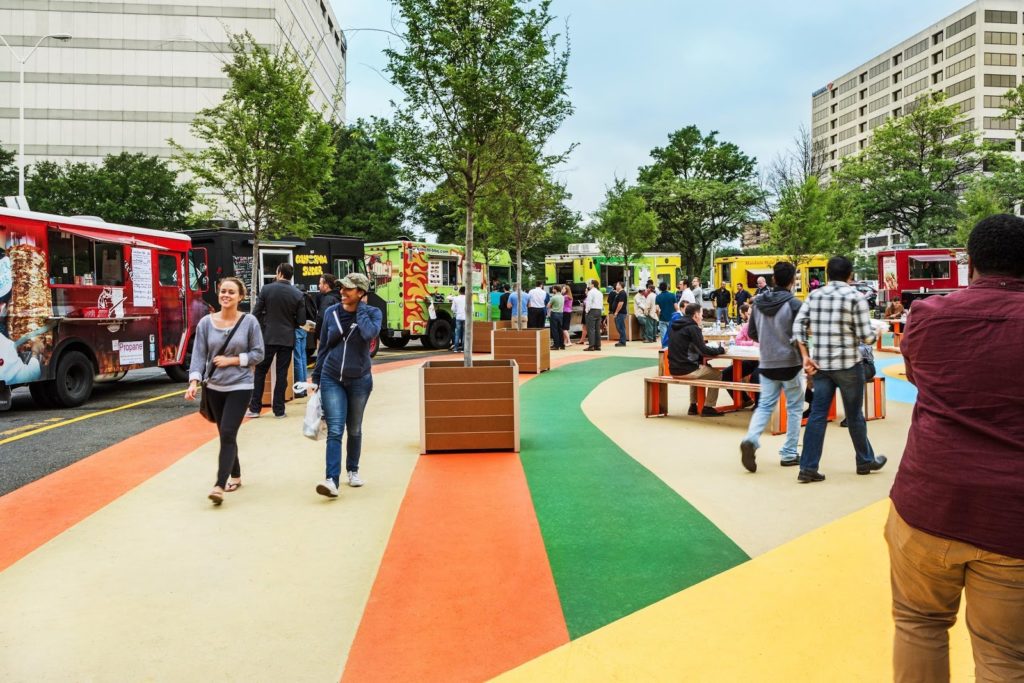 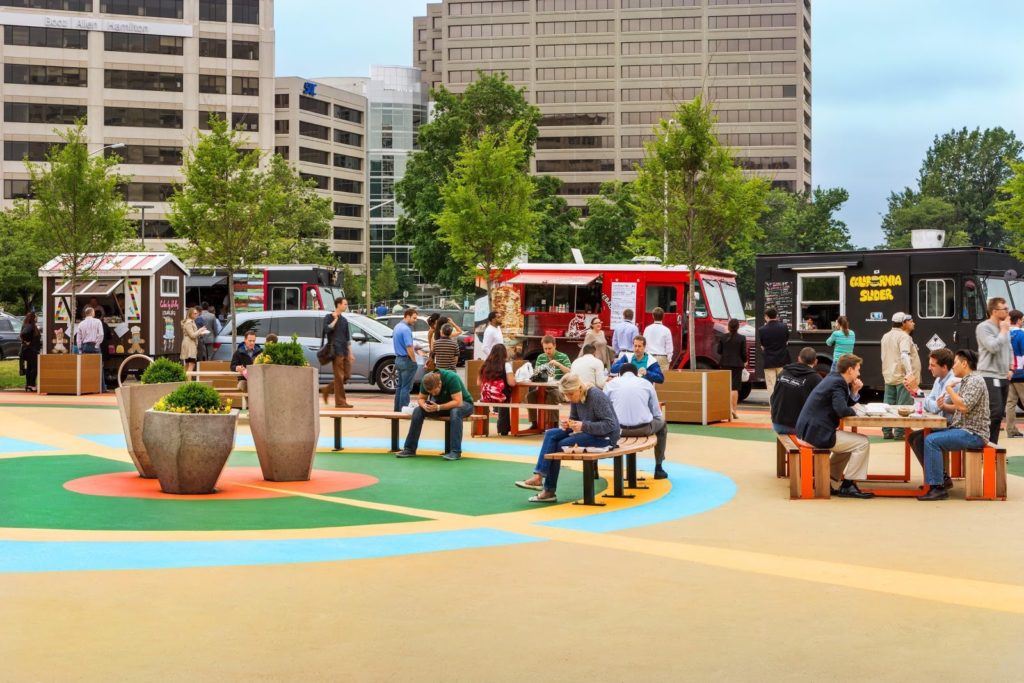 LandDesign partner, Stephanie Pankiewicz, PLA who led the design of The Boro’s pop-up park, believes that there is long-term value in investing in temporal amenity areas. She says, “when clients are investing in open space, programming becomes increasingly important. Integrating strategies, like pop-up parks at the beginning of the design of a project allows us to test concepts and receive instant feedback from the public.”

The success of a pop-up is dependent on the community embracing it as if it were always there. CAMP North End in Charlotte, NC is one of the largest adaptive reuse projects in the country, and throughout its redevelopment has been a rotating platform for temporary activation. The site had quickly become a local hotspot for innovation as creatives, artists, makers, and foodies set up shop throughout the 76-acre industrial park. Rather than waiting for the project’s completion to address the needs of the public realm, open spaces began to organically take shape to meet the needs of the tenants and visitors.

Shipping containers formed pedestrian walkways that lead visitors to pop-up retailers and dining, and a hodge-podge of furnishings and planters contribute to the site’s industrial aesthetic. CAMP North End is host to a revolving selection of musicians, vendors, food trucks and stands, and public art installations that prove minimal, organic programming can turn a vacant industrial park into a beloved community destination. 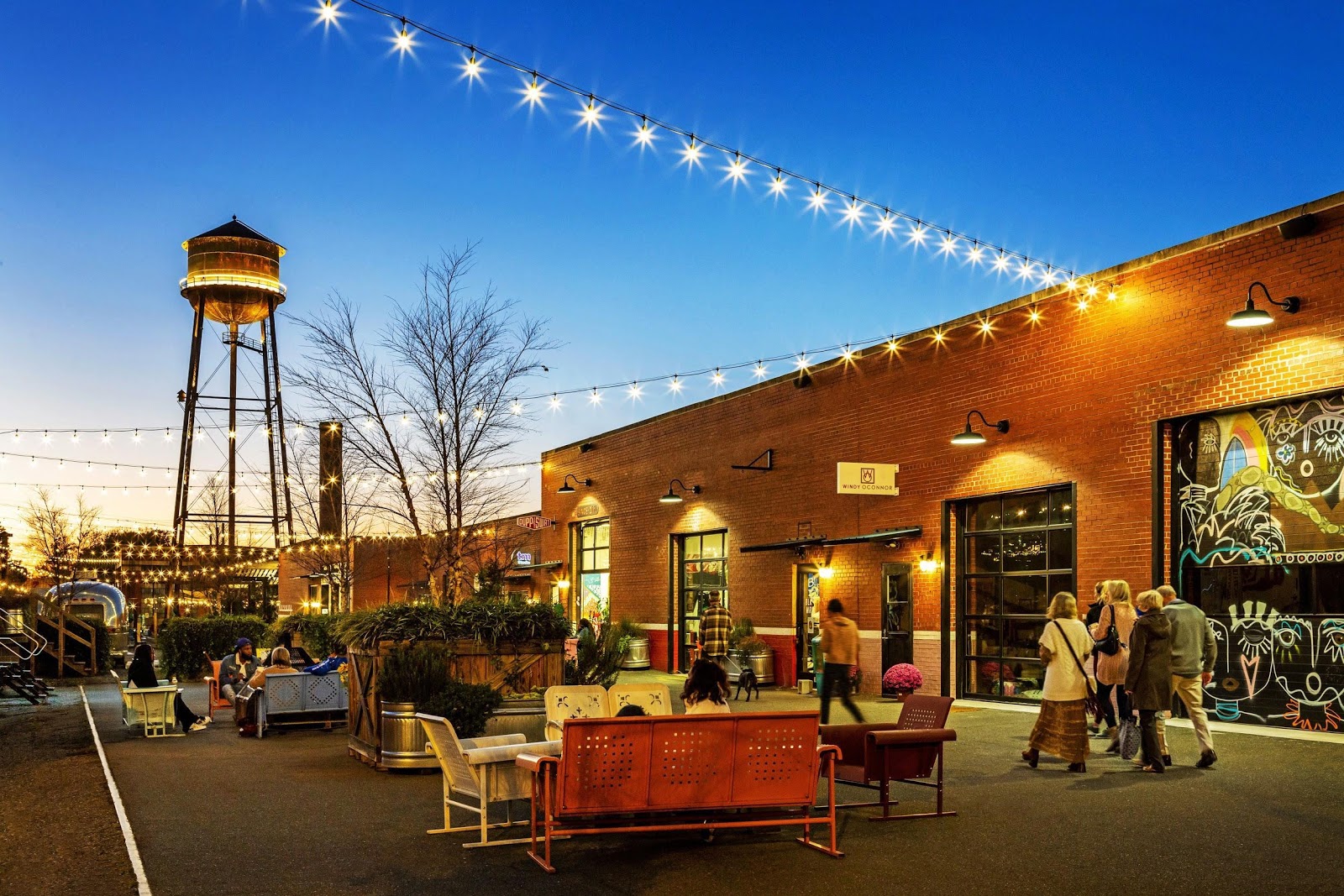 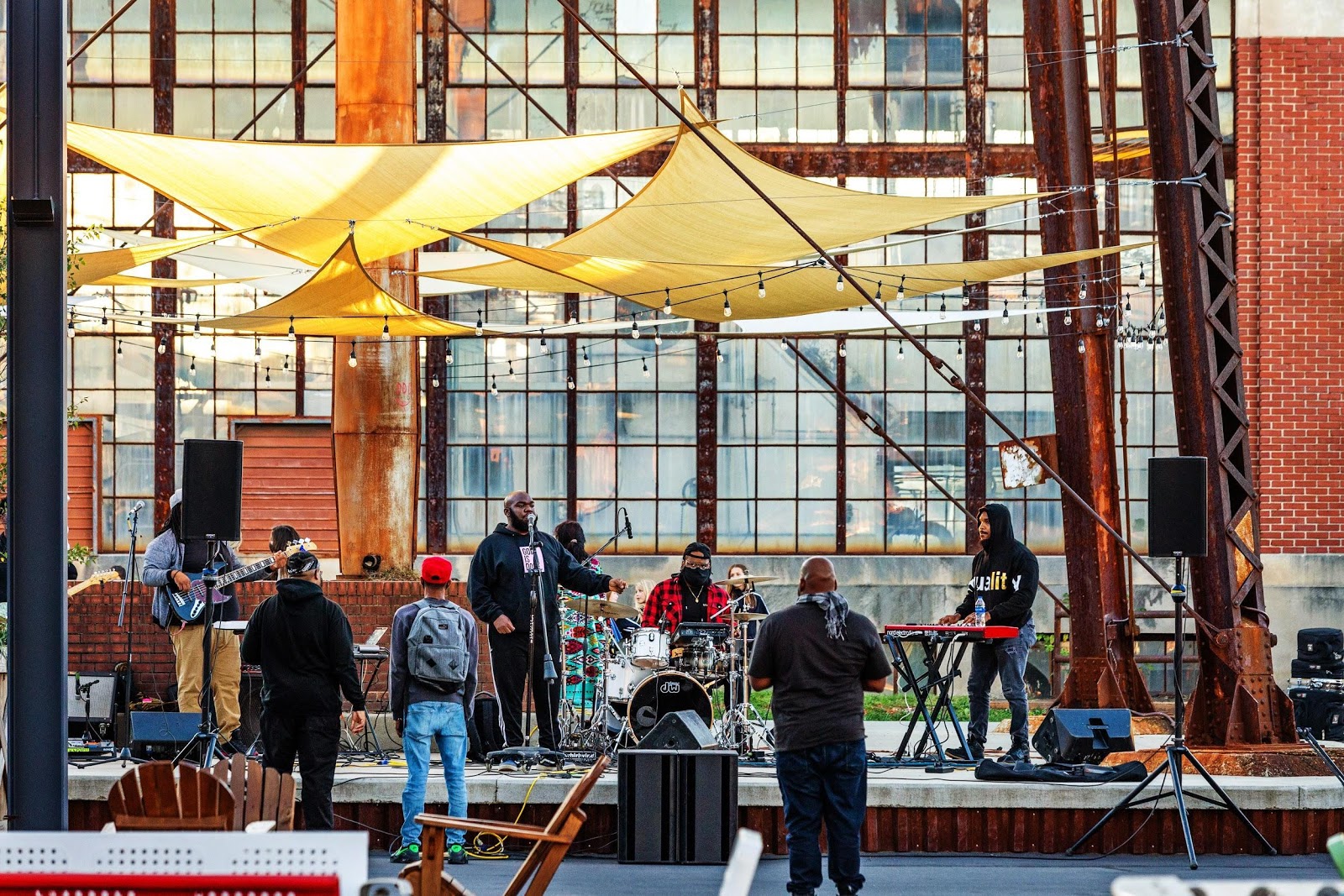 As designers, we like to think that the places we design can function without heavy programming. While programmed elements, like events and markets, can greatly contribute to the value of a site, strategic and well-executed placemaking can create an unparalleled draw to a physical place. Boxi Park, a temporary park in Lake Nona, FL, was constructed to attract visitors to the area while the greater community was under construction. Reused shipping containers, public art, and spunky furnishings turned this open plot of land into an instant community draw. Rotating food concepts, pop-up retail, live music, and areas for play add high visibility to the 30,000 square foot park. Boxi Park has helped build appeal for new residential and retail developments in Lake Nona and has become a Central Florida hub for gathering and socializing. 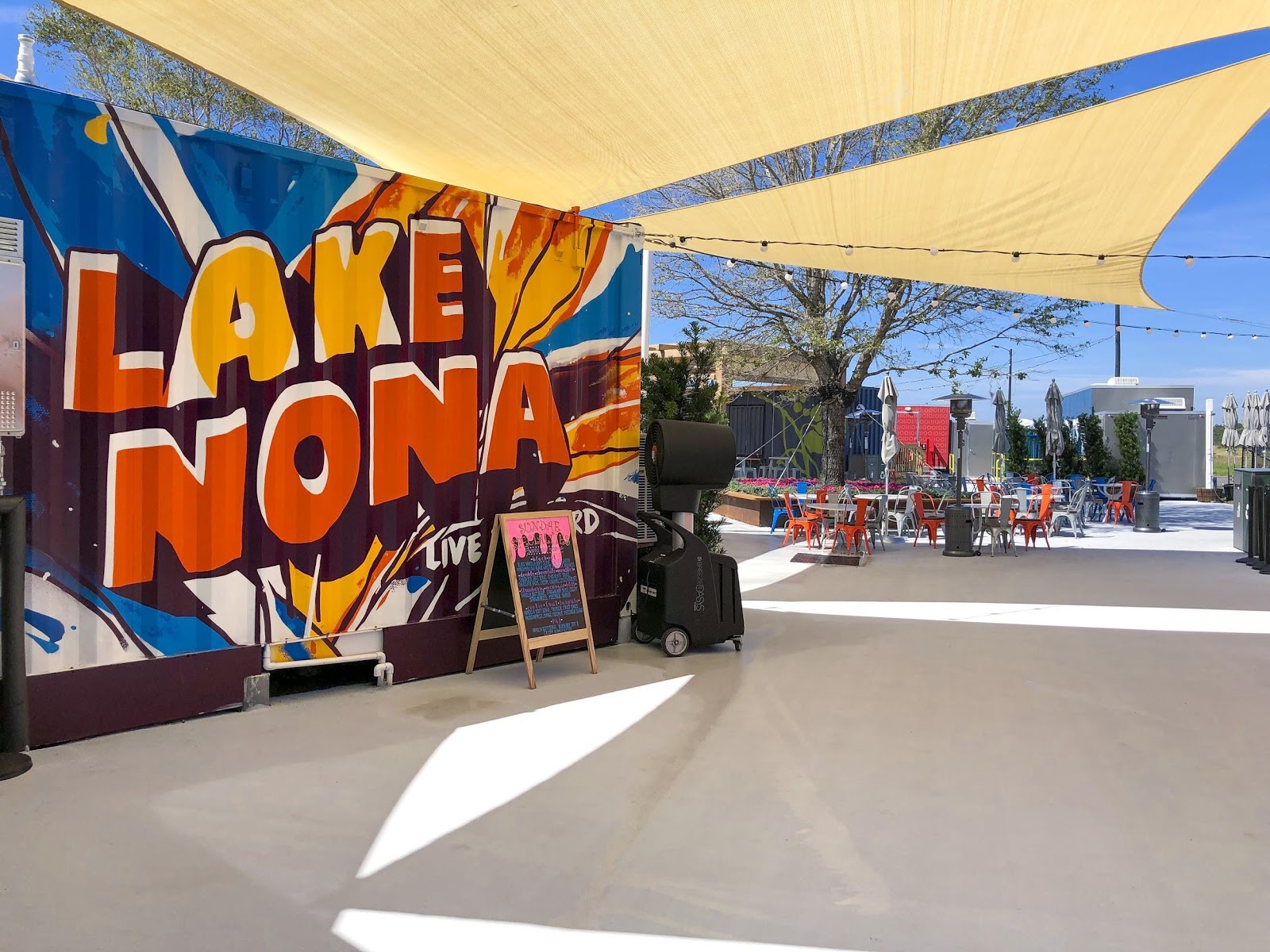 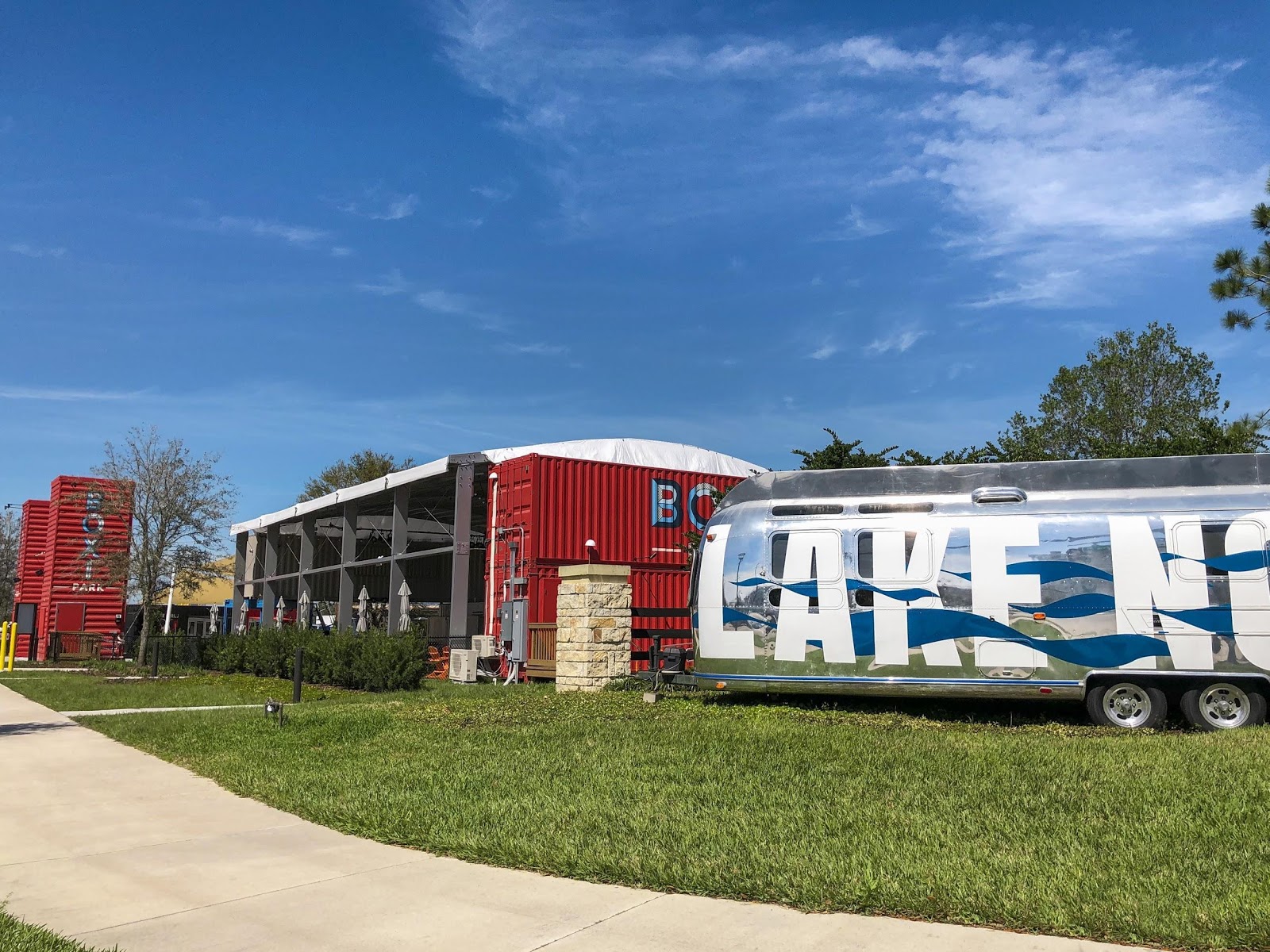 The value of creating temporary experiences allows the public realm to evolve quickly and address the long-term needs of the community. As a result of the COVID-19 pandemic, we saw people take advantage of public amenities, from neighborhood streets to regional park and trail networks. The renewed awareness of the importance of readily accessible, public open space has only strengthened the argument for activating areas temporarily.

Our new normal has challenged designers to respond quickly to the evolving needs of our neighborhoods and further understand local zoning and permitting requirements for pop-ups. At LandDesign, we leverage our integrated approach to have a thorough knowledge of the physical condition of a site to immediately begin testing design solutions that activate communities and support businesses. By reclaiming the streetscape, surface parking lots, and on-street parking for public open space, uses not previously imagined, such as outdoor dining, retail, and even fitness classes, can create additional value for private businesses and the greater community. The idea of smaller, transitional public spaces will remain relevant as we embrace our post-COVID normal and begin addressing the new needs of the public realm.